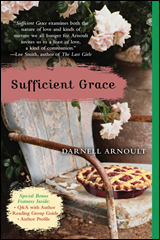 One quiet spring day, Gracie Hollaman hears voices in her head that tell her to get in her car and leave her entire life behind — her home, her husband, her daughter, her very identity. Gracie’s subsequent journey will effect profound changes in the lives of everyone around her. Ultimately, her quest leads her into the home of Mama Toot and Mattie, two strong, accomplished women going through life changes of their own. As the bonds between these women grow stronger and the family Gracie left behind comes to terms with their loss, both worlds slowly and inevitably collide.